Today is White Ribbon Day. It is also the International Day of the Elimination of Violence Against Women. In 2015/16, Centacare supported 1024 women and children across  four specialist domestic violence services.

Domestic violence is a man’s issue.

HE chooses to make it HER problem through abuse and control.

There is no excuse for deliberately hurting a woman and child.

“Over the years, the message to her has been to try and keep him calm, keep the kids quiet, keep the house tidy – do anything so as not to cause her partner to blow-up and become violent. In other words, be responsible for his behavior.

“As a society, we need to reverse that thinking and hold men to higher standards, as partners and as fathers.’’

Why do we question HER choices instead of the decisions HE makes?

We need to get clearer on articulating that perpetrators, particularly those who are parents, are 100 per cent responsible for their behaviours and their impact on the family.

HER choices do not put the kids in danger. HIS choices do! 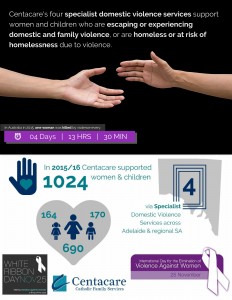