An idea born in a Mount Gambier classroom has grown into a community-wide domestic violence awareness campaign in the South East.

Brainstorming ways to promote the global 16 Days of Activism against Gender-Based Violence Campaign last year, Mount Gambier North Primary School’s White Ribbon student leadership group and a class led by their teacher Ms Sharon Mount, actioned a calendar of 16 events – one for each day of awareness. 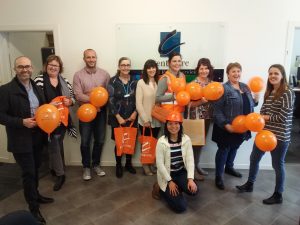 Centacare South East is taking part in 16 Days of Activism against Gender-Based Violence.

“The kids wanted something happening at the school every day for the 16 days because they wanted to get everyone thinking beyond domestic violence awareness as being just a one-day issue,’’ said Craig Wood, Manager of Centacare South East.

“They also wanted to embrace the idea of the human rights aspects around the prevention of violence against women and girls.’’

The calendar caught on, so much so, it’s back again this year – and this time the whole community is involved.

A White Ribbon breakfast at Frew Park, hosted by the Limestone Coast Family Violence Action Group (LCFVAG), will kick things off tomorrow morning before the focus returns to the school for its annual assembly and Loudest Shout Out. Everyone is invited.

The bags will be distributed through community service organisations to at-risk families living in remote locations where domestic violence support is less accessible.

“Kids are reaching out to other kids,’’ Craig said. “They’ve also written letters to other children, messages of hope, to let them know they are not alone and there are other kids out there who understand what they are going through.

“The community momentum is coming from the kids. They started with a question last year: how do you change the world? From that, their idea for the calendar has gone beyond the school to become a whole of region thing, and now they’ve worked together with their teacher Ms Mount again to develop the bags.

“They are so inspiring and driven and passionate about making a difference. And they have that wonderful childhood understanding that domestic and family violence is just wrong.

“It’s the most common thing we deal with in our work, and it has been for a number of years, and we need to address that issue.’’

Events will be held across the South East, culminating on Monday, December 10 – Human Rights Day. To access the community calendar, click HERE.