Twenty years ago, Tracy Ingram joined Centacare with a steely resolve to give young people living homeless a sense of stability and hope for the future.

She has since met thousands of faces, and seen and heard the unthinkable, in her role overseeing the Outer North Youth Homelessness Service at Elizabeth. 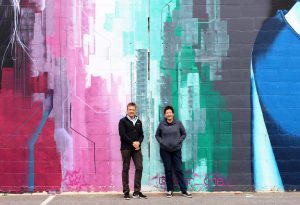 A rusty skate ramp rises from the flat of Tolley Reserve at Nuriootpa.

Dings, dents and scratches reveal the halfpipe’s popularity with young people who have been coming here to skate and scooter since 2002.

For Tracy Ingram, the humble structure is much more than just a hangout; it’s a visible measure of the two decades she has devoted to giving young people in the region purpose and hope for the future.

Tracy found her passion in the late 1990s. She was a solo mum, raising two teenage children and facing challenges of her own, when she put up her hand to volunteer for Youth Services of the Barossa.

At about the same time, a bunch of local kids got together to petition the Barossa Council for a place to skate. Local residents took up their cause and the community rallied, raising $90,000 – enough to kick-start the project.

Tracy was a vocal advocate for the young people, and with the help of a government grant, the skate park was born.

By the time it opened a couple of years later, she had joined Centacare and ventured onto the frontlines of youth homelessness across the north, fuelled by the same determination: to give at-risk young people a voice.

The case management role brought new challenges, least of which was comprehending the back-stories that spilled from clients as they reached out for support.

Twenty years later, their stories are more familiar but no less difficult to fathom.

The siblings get to Tracy the most; brothers and sisters turned out in the cold who are among the more than 28,000 young Australians aged between 12-24 years with no place to call home each night.

“When you hear siblings’ stories and you see them come in one after another because their parents don’t want them anymore, that gets me,’’ said Tracy, pictured with John Rademaker, Manager, Whyalla Youth Services.

“If a family is living in stress and that stress reaches boiling point, parents will often say `right, off you go’ but they don’t understand the system. They think if they kick out their 15–year-old, that young person will get a house, but that’s not always the case. It could be years before they transition into a stable, long-term option.’’

ONYHS provides case management, early intervention, outreach, post-crisis and wait-list support to young people aged 15 to 25 years who are homeless, or at risk of homelessness, across the Playford, Gawler and Barossa council regions.

In the past decade alone, the service has supported nearly 4000 clients.

Tracy estimates she’s worked directly with at least 1000 of those faces, sometimes more than once, as they cycle in and out of homelessness on the back of unresolved crisis, limited exit options, soaring rent, and a lack of affordable housing.

Some will have experienced the full gamut of trauma including sexual abuse, neglect and domestic violence before they hit double figures.

“I’m still surprised by people’s ability to cause harm and be horrible to someone for no apparent reason,’’ Tracy said.

“If I look back, a couple of characters from Carlow stand out because they were just so broken and hurt. I remember one young girl; she was moving from Gawler to one of our properties in Elizabeth. She was packed to go but then someone stole the hot water service from the new place so she couldn’t move in.

“She just curled up into a ball and cried because she felt like we hadn’t given her what she needed. It was horrible. I still wonder where she’s got to, even after all these years.’’

Little and a lot has changed since Tracy started out. The key drivers of homelessness remain, but the sector’s responses to clients facing increasing complexities are different.

“Ten years ago we could pretty much help nearly everyone who contacted us and get them some type of accommodation, but that access to housing is not there today,’’ she said.

“We could probably house five people every day of the week now if we had properties but there’s minimal options for maximum demand.’’

What the ONYHS team lacks in solutions it makes up for in creativity to conjure up the best alternatives for young people who are admired for their resilience and resourcefulness in crisis.

“Everybody is talking to someone we don’t have an answer for. Sometimes it’s just listing to the young person and hearing them out,’’ Tracy said.

“It’s hard to take in the stories every day when you know there aren’t any vacancies. Your heart breaks for them.

“Whatever sort of day we’ve had, we put that aside because we have a job to do. We don’t know what that young person has faced, and we will never know if we give them the wrong first impression.’’

Co-chair of Homelessness SA and a Homelessness Australia board member, Tracy said the biggest lesson she had learned over the years was that homelessness can happen to anyone.

“Society’s view of homelessness is not what it is. Homelessness is not the old man on the street or even the rough sleeper with a blanket. It’s the young person who’s going to school and trying to get an education who couch surfs at night or goes from shed to shed.

“If your marriage breaks down and you haven’t got a full-time job, savings or super and you can’t find a rental, you could be next. Anyone can find themselves in a pickle.’’

Tracy said working in the sector had been her greatest education in life: “It’s taught me to appreciate what you have, and to never judge others or take anything for granted. When you see someone walk through the door at Centacare who has nothing, yet they are still happy and talking about the future with goals and dreams, that’s really humbling. That’s what brings me back each day.’’