Sarah Staiff thought she was a cat person until a shout-out for puppy boarders bobbed up on her Facebook feed.

“I saw the Royal Society for the Blind (RSB) ad with the cute little guide dog puppies and thought, I’d like to do that!’’ she says.

A Therapeutic Children’s Worker at Louise Place, Sarah is also now one of the many volunteers caring for guide dogs in South Australia. 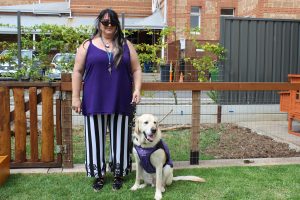 As an emergency boarder, she takes on dogs at short notice, and at various learning stages.

They can stay with her for a day, weekend or month, and even more than a year.

“It’s a great way to have a dog without having a dog!’’ Sarah says.

Indigo was the first puppy Sarah brought home, followed by Quahlee, but today handsome Umber is by her side.

As a working Guide Dog, nearly 5-year-old Umber is well schooled in his role as a mobility aid and companion for his client who has a vision impairment.

Other working dogs support people who are blind or vision impaired, children with Autism and people with Post Traumatic Stress Syndrome (PTSD).

“With puppies, you have to be continually using the commands but with the working dogs, my role is more about maintaining what they already know,’’ she says.

“I’ve just finished with a dog I had for three-and-a-half months. She went into what they call big school – formal training, so she goes to the Gilles Plains RSB site during the day and has boarders who drop her off and pick her up at night.’’

Saying goodbye to the dogs when they leave is sad, Sarah says, but also satisfying knowing she has helped to give them a good start in life.

In her role at Centacare, Sarah supports mothers to build and strengthen attachment with their child through group activities, therapy, case planning and one-on-one play.

“Both roles have shown me that continuity works for people and dogs, and how consistent interactions and behaviours can build understanding and functioning relationships,’’ she says.

“To support a child to discover something for the first time, or even the hundredth time, be it a flower in the garden or taking their first steps, is awe-inspiring.’’