The great spiritual teacher Dr Wayne Dyer used to say that when you squeeze and orange you’ll always get juice, because what comes out is what’s inside.

The same logic applies to us.

When we’re squeezed in times of adversity, if we are full of anger, or resentment, or preciousness, then that is what will come out.

Last night, we were squeezed. We were put in a vulnerable situation over which we had no control. 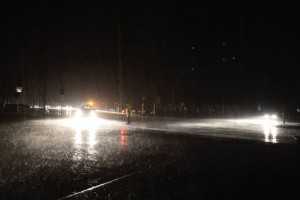 We felt uncomfortable and perhaps a little scared. I personally felt quite vulnerable with a son in a wheelchair who was in the dark, at home, with no candles.

But in terms of global catastrophes, this was a hiccup.

New York was blacked out for 38 hours when this happened there, yet we had people screaming on the radio last night blaming the government because we didn’t have power for a few hours. When it did come back on, they were still complaining.

When I ventured out last night to try and find candles in a city chemist shop, I was greeted by a lady in the dark berating the chemist because she couldn’t have her script filled.

The chemist was valiantly, and very nicely, trying to explain that she could source the script, but it would take her ‘til about 8pm last night.

But the woman said this wasn’t good enough.

An elderly lady then came in and apologetically asked for some Aspirin because she’d run out and had a bad heart.

I looked at the differences between the two and unwisely said in the dark from behind, `we are really very lucky in this state that this is a first.’

The woman turned to me and said, “Lucky?! You call this lucky. Why am I supposed to put up with this? I have a script that needs to be filled.’’

Soon after, the elderly lady and I walked out together and she apologised to me for having to share my umbrella.

When I got back to my son’s place and listened to the radio on my phone, which I was very lucky to be able to do, and heard more people complaining, I thought to myself how lucky we really are that this should cause us to become so angry so quickly.

We need a dose of gratitude and a dose of resilience. I’m not saying that wasn’t out there, and I’m sorry for the people in regional areas who remain in discomfort.

Situations like last night call on us to put ourselves aside for a minute, observe what we’re experiencing, and put it in perspective.

Ask yourself: Is my life being threatened, or am I just being asked to be a little uncomfortable for a while? Have I lost my whole sense of security, or am I just temporarily confused? Have I got no control over my life, or am I simply being asked to relinquish a little bit of control to the people that know what they’re doing?

Our western comfort was challenged last night. In the light of day, let’s think about it and be really, really grateful.