Grazziella keeps a mental note of hundreds of names and faces, just in case the doorbell rings.

For the past 26 years, she has worked at Malvern Place, one of four Centacare sites across Adelaide delivering the Young Family Support Program (YFSP).

The service provides accommodation and outreach support for young pregnant or parenting women who are homeless or at risk of homelessness.

“It’s nice to be able to open that door and use their name if a young woman and her children come back to visit,’’ Grazziella says. 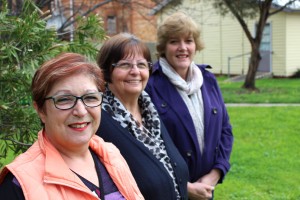 From left, Desi Alexandridis, Grazziella and Cathy work on the frontline of child protection.

“Some move on to their next accommodation option but still want us in their life for support. Others leave and we don’t know where they’ve gone.

“There’s always a bigger story than what you see, so they are certainly hard to forget.’’

Referrals come from anywhere including schools, doctors, hospitals, other youth or women’s services, self, and government and non-government organisations. Service provision is offered within a case management model in which the children’s safety is paramount.

Girls as young as 12 seek Centacare’s support for complex and multiple needs, more often than not, against a backdrop of generational dysfunction.

They may be in debt, battling drug and substance abuse, have an intellectual disability, lack parenting and everyday life skills, and have been abused and neglected themselves as children.

“Sometimes it’s hard to know where to start but building trust with the young person is always the first step,’’ Grazziella says.

For more than two decades, she has worked with Desi Alexandridis, Senior Manager of Domestic Violence and Homelessness Services. Desi oversees the YFSP at Malvern Place and Coolock House.

She says it’s impossible not to be moved by the little faces who are sometimes born into the program.

“Babies quickly become aware of the situation they’re in, particularly if the mum is not attuned to them and their needs,’’ Desi says.

“Aside from the physical aspects of feeding and clothing, touch and eye connection between mother and baby is really crucial. When they don’t get that, the baby learns to survive in different ways from a very young age. They might cry constantly, be hypervigilant or totally non-responsive.

“It takes time and patience, education and support to help the mum in order to help her child.

“We are seeing deeper emotional wounds now in mums. When I first started, they still had the trauma but we were able to build a relationship with them a lot quicker. Now this is getting harder. There’s the issue of methamphetamines and much higher incidences of poor mental health.’’

“The emotional impact some of the mums and children have on all of us ripples out to the whole service,’’ Cathy says. “For many children, the YFSP is their first experience of routine and stability.

“When I feel very sad is when I’m putting a baby on the homelessness register on the day they are born. I always have a little moment to myself because I am opening a file for them as a high-risk person on their birthday. I do that quite a few times a year.’’

Cathy began work at Coolock House on a student placement and never left.

“The good things sustain all of us,’’ Cathy says.

“The girl who rings up because she now has her own place and she’s got a tray of cupcakes in the oven for her children, but she doesn’t know how to tell when they’re cooked.

“A couple of years ago a young woman and her little boy came back to visit. He was about three when they lived on site. There were a lot of child protection concerns.

“When they came back, the boy pranced in and said, `Mummy and I used to live here and you loved us’.

*The Young Family Support Program is being highlighted as part of National Child Protection Week. This year, the campaign invites all Australians to play their part to promote the safety and wellbeing of children and young people by building stronger communities.