Rosslyn Richards is piecing together her language for the next generation – one puzzle at a time.

A proud Ngarrindjeri woman, Ros has crafted and painted a set of floor puzzles to teach young children traditional language through pictures and emojis.

Many Aboriginal languages and dialects are extinct and others are endangered because of few surviving speakers. 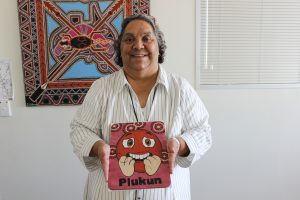 “A lot of the time we’re teaching the mums as well,’’ says Ros, a family practitioner with Centacare’s Po:rlar Ka:ngkun Tainkuwalun (PKT) program which readies children for kindergarten and school.

“It depends on how they grew up: if they didn’t speak their language at home when they were little, they won’t know much of it today.’’

Emotions, animals and seasons are depicted on the puzzles which Ros made from placemats, with the help of fellow PKT worker Mark Capurso.

“Every few weeks for a craft activity for playgroup we try to include our language, whether that’s something from one of our Dreaming stories or an everyday word.

“By teaching our very young ones the language, hopefully they can carry it on.’’

Community groups and schools in Murray Bridge are working hard to revive and maintain the Ngarrindjeri language.

Nationally, NAIDOC Week this year focused on why languages matter and the role they play in Aboriginal cultural identity, linking people to their land and water, and in the transmission of Aboriginal and Torres Strait Islander history, spirituality and rites.

“In Murray Bridge, we are pushing to have our language taught in schools and there are some schools that are already. Now our playgroup is helping by teaching it as well.’’

Start to learn Ngarrindjeri with these simple words: 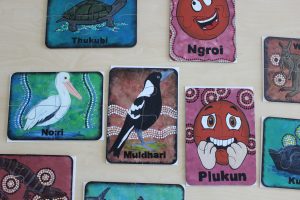