Imagine being a mum with an eating disorder and cooking the family meal each night.

“It’s the unspoken secret for a lot of women: trying to raise a new life when they haven’t got hold of their own.

“How does someone live with that? Cooking the family dinner, looking at the scraps, feeding everyone, smiling, pretending they’re happy…”

Through our PACE service, Centacare provides a range of recovery services for people living with an eating disorder. Many of our team members are peer workers, which means they have a lived experience of what you are going through.

Astrid took an eating disorder through her teenage years into adulthood.

When her illness collided with pregnancy and the birth of her son, she faced a new set of challenges.

“There were pros and cons,’’ she says. “As we know with kids, it’s what you do – not what you say – so I had to be a positive role model and start showing my son the way.

“It was one of the hardest things.

“The discipline around food, sitting down and eating well and being mindful with that eating… I still work on that.

“I had times of wellness but I think in the end, it was just knowing I need to be around, and wanting him to have a strong woman to look up to, that pulled me away from it.’’

Astrid believes a whole generation of women are in silent turmoil and points to rising suicide rates in women aged over 50.

“The face of eating disorders has always been a schoolgirl, or the belief it’s the disease of models, but it’s pervasive through all age groups.”

The public’s intolerance of eating disorders makes it hard for older women to seek support, Astrid says, adding we need to normalise conversations around anorexia, bulimia and binge eating, and move away from unrealistic social media-driven perceptions of health.

“Who are the young girls looking up to if the women of the tribe, the matriarchs, are frightened because they’re not allowed to grow old gracefully anymore?

“There used to be the mentality that when you’re 40 it’s ok to let yourself go but now there’s no such thing. We’re expected to look younger longer into our 50s.

“It’s got to be a revolution not an evolution.’’

Today we mark the second annual World Eating Disorders Action Day. This year’s #WeDoActTogether theme is about making connections to support people to move forward. Eating disorders can be very isolating. Through our PACE service, Centacare provides group support to encourage people living with an eating disorder to find their voice, share their experiences and learn from one another. 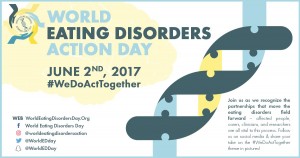