When Chris Chalubek was diagnosed with bipolar, he googled famous faces living with the disorder to find his `people’. The Assistant Executive Manager of Health, Wellbeing & Education services at Centacare is now sharing his own lived experience in the hope of helping others.

Chris Chalubek was in his late teens when he first experienced anxiety.

By his twenties, he was enduring regular bouts of depression.

The dark pressure Chris felt enveloping his mind was offset by a bright, euphoric `light’ that sent his thoughts racing and caused his muscles to twitch.

For 20 years, he managed the highs and lows: manic flashes of energy and grandiose ideals preluding extreme mood slumps and low self-esteem.

“I was either flicking through a rolodex of ideas thinking I could take on the world at a hundred miles an hour, or working against the dark component,’’ Chris says.

“It was exhausting. In my toughest moments, it felt like I was pushing against water; I just had no traction and it was really hard to be hopeful.’’ 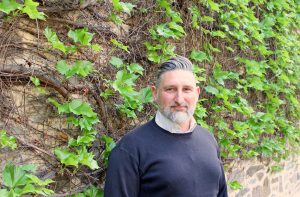 Twelve months ago amid his worst depressive episode yet came a breakthrough when Chris was diagnosed with bipolar disorder, which one in 50 adult Australians experience each year.

For the first time, he was able to properly make sense of his symptoms and the challenges they pose each day.

Up until then, Chris had managed as best he could, doing whatever it took to “keep it all under wraps’’ always with the constant support of his family.

Characterised by strong changes in mood and energy which can last a week or more, bipolar affects our thoughts and behaviour.

Untreated, it can make it hard to cope at work, home, school and in social settings.

“The diagnosis gave me a foothold; it was a huge relief,” Chris says.

“With that has come insight and understanding around how I can be well and start my journey of recovery.”

A large part of that has been shaking off the fear to reach out for help.

“It takes a lot of strength to ask for help when there is still so much stigma around mental illness,’’ Chris says.

“Part of moving forward is realizing there is more to me than bipolar, but if the perceived messages around that are negative, then it’s hard not to withdraw and be scared.

“I have always been open about it with my wife and family but I didn’t feel like I could come out and speak about it to my broader community and social circle because I thought they wouldn’t understand.

“Now asking for help isn’t a big deal. I actually feel stronger for it. I realise the importance of being open to and accepting help, whether that’s from general practice, psychology or a psychiatrist.

“I’ve found there are so many ways to get well, so many things you can do, whether that’s mindfulness, exercising, reading up on what’s happening to you or medication.’’

Chris is sharing his lived experience in the hope he can help others answer the question `what next?’ instead of `why me?’

Having supported the lived experience workforce in his role at Centacare, he has seen the opportunity and hope that honesty can bring.

“When you are in the midst of being unwell, you can lose your old self.

“Positive role models and people with lived experience can become really important factors in helping you to work through that identity crisis.

“I want to re-frame my lived experience and use it as a positive to help others live their life forward.