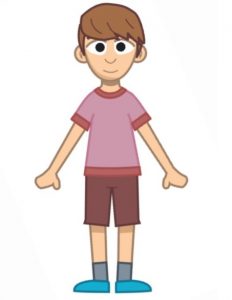 The cute, brown haired five-year-old is among a cast of faces fronting a new Centacare campaign to encourage people to become foster carers.

Launched by Centacare Foster Care, the campaign puts children at the heart of a `circle of care’, and highlights the role of foster families in giving children safe and loving homes.

Using the hashtag #joinourcircleofcare, the campaign is centred on 18 fictitious characters which also feature in a new logo and program branding.

Carers, children and even a family pet form a circle to symbolise Centacare’s child-focused practice, and the care team that wraps around foster carers to train and support them on every step of their journey.

The aim is to raise awareness of the need for more foster carers, and the different types of care that households can provide to help children just like Jamie.

“We really wanted to represent key themes of why children may come into care, as well as what motivates people in community to put their hand up and join our team as foster carers,’’ Manager Amalie Mannik said.

At three-years-old, Jamie was removed from his birthparents after witnessing domestic violence and excessive drug and alcohol use resulting in neglect and his needs not being met.

He was placed in residential care for eight months before transitioning into a foster carer’s home shortly before his fourth birthday.

While his early childhood experiences have impacted on his learning, Jamie can speak sentences and write his own name.

“We are going to use the stories of the characters throughout our trainings, so you will be able to follow the carers and the children through each of their unique journeys in foster care,’’ Amalie said.

The characters were illustrated by Quisk web designer Denham Haynes, who worked closely with Centacare Foster Care to develop their traits and back stories.

“Storytelling is a powerful medium and resonates with people from all different backgrounds and cultures,’’ Amalie said.

“Stories are not only tools we can use for training and learning, they can also be very healing and we hope our circle of care enables stories to come to the forefront. “

The process of becoming a foster carer can take between three to five months from application through to approval.

To join our circle of care, please phone Centacare Foster Care on 81591400 or email fostercareenquiries@centacare.org.au

Jamie is five-years-old and was removed from his birthparents when he was three.

When Jamie lived with his birthparents, he witnessed domestic violence and excessive drug and alcohol use, resulting in neglect and Jamie’s needs not being met.

When Jamie was removed he was underweight and had global developmental delay, meaning that he was behind other children his age in terms of speech and in meeting physical milestones.

Jamie was placed in residential care for eight months, before transitioning into a foster carer’s home shortly before his fourth birthday. His foster carers noticed that Jamie would try and get his own food, hide food in his bedroom, and would often freeze or jump behind furniture when he heard a loud noise.

Due to Jamie’s early childhood experiences, he finds it difficult to remember information, which has impacted on his learning and he has just been told that he will repeat kindergarten.

Jamie also finds it difficult to calm down when upset, often destroying household items and needs help from his carer to move through big emotions.

Jamie has made lots of progress and will remove himself from others when feeling upset and will rip paper and cardboard in his own space to soothe himself. Jamie can also speak sentences and can write his own name.

Jamie is also a very active child, who enjoys swimming, playing soccer and visiting playgrounds with his foster family. He looks forward to visiting his birth parents at family contact and his carers provide him with plenty of photos and crafts to share with his birth family during those sessions.