On International Women’s Day, we reflect on a brave 21-year-old who was instrumental in laying the foundations for Centacare’s work.

Born in 1917 at Tarlee in the mid North, Hannah Buckley only had a few years with her parents James and Cecelia before she was orphaned.

Hannah and her two sisters were sent to Adelaide to be cared for by two maiden aunts. Intelligent and social-minded, they enrolled Hannah at Loreto College, and encouraged her to pursue further education. They fostered a belief that middle class girls should ‘do good work’.

Hannah studied economics and then went on to enrol at the newly-formed Board of Social Service Training (part of the University of Adelaide) in 1935 becoming one of South Australia’s first trained Social Workers. 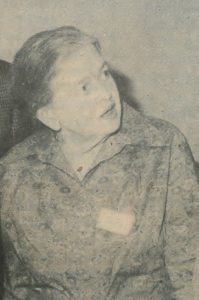 As a well-educated 21 year old involved in Catholic Social Justice activities, Hannah came to the attention of Archbishop Matthew Beovich who was looking to establish a Catholic Social Services Bureau.

From 1942 – 1947 Hannah established and defined the role of the agency that was to become Centacare Catholic Family Services. She made important initial steps in reforming the care of children in alternative care, and in providing essential services to families.

She battled against elements of a Church bureaucracy suspicious about the abilities of a single, young woman to affect change, against chronic shortage of resources and in the midst of enormous social upheaval caused by the Second World War. It is telling that it took four years for Hannah to be reimbursed for the costs she incurred in purchasing the agency’s office furniture and stationery in its first year of operation.

After leaving the Bureau in 1947, Hannah worked in a number of hospitals, before she was appointed head Social Worker at the Queen Victoria Hospital, where she stayed for 16 years.

Hannah shaped a whole generation of social workers in South Australia when they did their placements at the hospital. 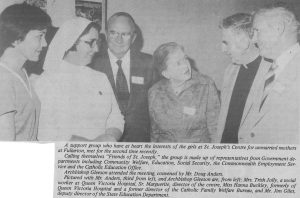 Hannah was very pragmatic and stern but had a sense of humour. She had a powerful sense of justice and believed in a fair go for young people. She didn’t like overly bureaucratic processes and believed her workers just needed to get on with the job of helping people.

She didn’t see anything about marriage that made her think it was the only option for women.

She went to Church often, was pragmatic, kind and not judgemental in any way. She died in 1981

Centacare’s Hannah Place, a service for young women who are homeless and pregnant, is named after her.

Hannah Buckley is a woman who was a pioneer, who left her mark on her community and who deserves to be celebrated to this day…..