If Gavin Wanganeen had his way, domestic violence would be a compulsory subject in every Australian secondary school.

For the past year, the former Port Adelaide Football Club captain

has played a lead role delivering the Power to End Violence Against Women (PEVAW) program to 1510 Year 10 students in 21 schools across regional and metropolitan South Australia. 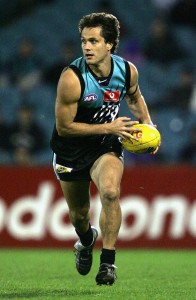 “Every session I take away how real this issue is, and how much work still needs to be done to stop domestic violence,’’ says Gavin.

A collaboration between PAFC and Centacare Catholic Family Services, the program teaches young men about respectful relationships with women, including trust, gender equality and the dangers of abusive behaviour.

“We have their attention the whole time,’’ says Gavin, a proud father of five.

“At the beginning, a lot of them don’t know much about DV but when we bring up some of the stats and give them the information, you can see them thinking `wow, that’s just not on’.

“You can sense by the way they participate that they want to do the right thing, and that’s really powerful.

“We don’t beat around the bush. We put the facts to them.

“When I get up and talk, I’m really passionate and I tell them the reason I’m here is because I have four daughters.

“I want them to be in a safe environment when it comes to relationships.’’

The program models another way of thinking to boys who may be lacking positive role models in their own lives, says Gavin.

“We all have mothers, aunties, sisters, grandmothers… We ask them:  Would you want to see them being harmed in any sort of way? Of course they don’t, and that’s why we’re here.

“You know if the boys do have any personal issues going on, they will take so much out of a session like this. It’s a huge help to them.’’

Launched in late 2015 with the help of the State Government, the PEVAW program is being funded by Centacare until 2019 in order to reach more male students across the state.

“We believe it offers these young men another perspective about what makes a healthy, respectful relationship and gives them a choice, during a vulnerable and influential time in their lives, to contemplate this other way,’’ says Pauline Connelly, Assistant Director, Centacare.

“They have been challenged by what they have experienced when listening to the players share their values, beliefs and ideas around respect, around dealing with anger and around equality.’’