Established in 2010 by Robert de Castella, the project uses running to instil a sense of pride, purpose and accomplishment in young Aboriginal and Torres Strait Islander people aged 18 to 30 years. 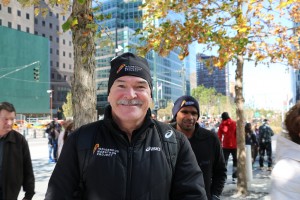 “That’s pretty silly. Most people train for years before they embark on a marathon which is synonymous with hard work and struggle.

“But we want it to be hard because we work on the philosophy that when you achieve hard things, you feel good about yourself.’’

Before the project began, no Aboriginal person had finished a major international marathon.

That feat has now been achieved by 65 young people who have crossed the finishing line in New York, Boston and Tokyo.

“The thing that shocked me travelling around Australia in the early days was there was a lack of self-respect and pride, and feelings of despair and hopelessness,’’ de Castella said.

“We use running as a way to instil a sense of pride and accomplishment, and finding your voice and courage, so you can embark on a strong life and go forward with a sense of purpose so that you can really make a difference.’’

“When Elsie started she was ashamed to run,’’ he said. “A car would come past and she would stop and walk and wait for the car to go and then she would start running again.

“After doing that for a couple of weeks she said: `This is stupid. Why am I stopping? I should be proud of what I’m doing and get out there and show everyone.’

“So she kept on running and then people started looking at her out the window as they drove past and then they started tooting the horn, and now they’re out there joining her!’’

Elsie now manages IMP’s FrontRunners program and is based in Canberra. de Castella says it’s what graduates do after they’ve crossed the finishing line that matters the most.

“We provide support and mentoring and grants and opportunities for them to step up to the next level and become Indigenous leaders.’’

“I’ve faced adversity throughout my life and I was feeling lost and wondering what my purpose was,” she said.

“Running a marathon is hard, it’s one of the hardest things you can do. But with small steps you can create big waves.’’