In The Advertiser today, Director Dale West highlights the growing incidence of children abusing their parents, and why data is needed to measure the scale of the crisis. 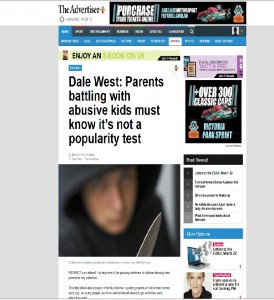 RESPECT your elders? Not anymore, if the growing incidence of children abusing their parents is any indication.

This little talked-about aspect of family violence is putting parents at risk in their homes each day, as young people use force and emotional abuse to get what they want, when they want.

The scale of the crisis is unknown, but there is growing demand for data and support from victims who regularly endure hurt, emotional abuse and property damage at the hands of their kids and grandchildren.

National discussion around this issue has been largely overshadowed by the campaign to prevent violence against women, but that does not make it any less important. It’s the conversation society needs to have.

Centacare staff say it’s a silencing issue because it is very challenging for a parent to seek help.

Social boundaries don’t exist and the impact permeates every aspect of the victim’s existence.

Examples don’t need to be exaggerated for effect.

Children holding bread knives at their parents’ throats when they call time on their internet use.

Pets being mistreated and siblings terrorised.

One mother was left with a massive repair bill after her 13-year-old bored tunnels in the ceiling to escape the house.

A father was locked indoors and forced to watch as his 11-year-old daughter methodically smashed the family’s car windows in rage at having her mobile phone confiscated.

With social media now viewed as a “lifeline” by teenagers, the idea that it should be taken away in favour of taking out the garbage is, to them, abhorrent.

Then there’s the financial abuse: children threatening parents with violence if they don’t fund their lifestyle, for example by paying exorbitant taxi fares at all hours of the morning.

Let me be clear: these are not children’s reactions to being abused by their parents. That is a different issue.

Today, some young people’s inflated sense of entitlement, dressed up as “rights”, drives their reactions to situations without any sense of reason or fairness.

Parents who feel trapped in these circumstances do not need to feel helpless against the tide of abuse.

Centacare and other support services offer courses and counselling for parents with children between eight and 25 who constantly challenge authority and discipline.

Parents can identify what will motivate their children to make changes, and useful strategies to curb this behaviour — including calling the police — before it is too late.

Parenting is sometimes about making hard decisions. It’s not a popularity contest.