Informed by his own courageous journey to freedom from South Sudan, Clement Kuek provides crisis support to Adelaide’s African community.

Clement Kuek was eight years old when he lost his way in the dark fleeing Arab militia in South Sudan.

“That night, it was around 3am, and the whole village just ran in different directions,’’ he says. “I went with my mum and my siblings but I lost my way.

“I didn’t know where my family was or what to do. I saw other groups, people running, so I followed them. In one group was my cousin and he told me `don’t worry, we’ll find them’, but I didn’t.

“The days passed. I stayed with the group and we walked, for three months, to Ethiopia. On the way, there was no water to drink, no food to eat.

“Some people were dying from hunger, thirst. Some were bitten by snakes and taken by lions but, thank God, we managed.’’

Unbeknown to Clement, his father Kuek Thou was also walking, in desperate search of his son.

“One of the guys who came after said my dad walked from home to another place, one month away, in search of me. But he couldn’t find me and no one told him I went to Ethiopia. That’s a sign of love, what he did, looking for me.

“We had to cross the River Nile. There was no way across except on wooden boards. There were crocodiles and it wasn’t easy. Maybe that stopped him.’’

Clement stayed in a camp for minor groups in Ethiopia until 1991 when he returned to the South Sudan border. From there he went to the Kakuma Refugee Camp, run by the UN Refugee Agency, UNHCR, in the north-western region of Kenya, where he finished his education.

In 2003, Clement arrived in South Australia, alone, as a refugee.

It took him many years before he was finally reunited with his family, only to learn his father and two of his siblings were killed in 1998.

“Sometimes I sit down and think of my father and how good he was,’’ Clement says.

“He’s looking after me. If you look at the difficulties that I’ve gone through, God is there and Dad is also there supporting me and giving me the courage to go on, otherwise I would have lost hope. But I still have hope inside of me.’’

Through his role at Centacare and the Catholic Archdiocese of Adelaide, Clement uses his journey to freedom, and the values instilled in him by his parents and Sudanese culture, to provide crisis and other support to the African community.

Clement says the challenge of beginning a new life in Australia with different laws, value systems and cultural expectations, is overwhelming for many families.

This is made all the more difficult due to the often traumatic circumstances under which they left Africa.

“The support I’ve had from people and the Church all along the way has encouraged me to give back to the community I live in,’’ says Clement. “I feel that it is my duty to be there for the people if they think the support I can give them will help.

“I don’t see them as just a person coming to me asking for something, or coming as a client. I see them as part of me, part of my family.

“When someone comes to you for help, you can’t just turn that person away without knowing the reason why he or she is there.

“If people are struggling and you don’t know what sort of help to give, well, you can feel sad about that but you have to be strong to support them.’’

On Harmony Day, Clement has this message: “ You have to be proud of who you are and where you come from, and then look at the country you are living in and bring the two together.’’

* Clement’s role is being featured in recognition of Harmony Day, a national celebration of Australia’s cultural diversity. At Centacare, we strive to be inclusive, respectful and to grow a sense of acceptance and belonging for everyone. Our policies reflect this. #HarmonyDay 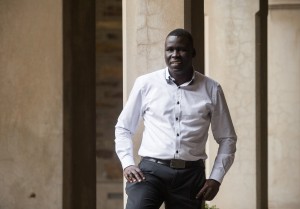