The Catholic communities of South Australia and Townsville are today mourning the death of Emeritus Archbishop Leonard Faulkner.

The much-loved former Archbishop of the Adelaide Archdiocese and Bishop of Townsville diocese died yesterday afternoon at the Pines Lodge in Adelaide, aged 91.

The eldest of ten children, he was born in Booleroo Centre in the southern Flinders Ranges on December 5 1926 and after entering the seminary at Rostrevor was ordained a priest in January 1 1950 in Rome.

He was appointed Bishop of Townsville on November 28 1967 and on June 19 1985 he was installed as the seventh Archbishop of Adelaide where he continued his commitment to, and support of, the lay people as a critical part of the life of the Church.

His funeral Mass will be held in St Francis Xavier’s Cathedral on Monday May 14 at 11am, following a vigil service in the Cathedral commencing at 7.30pm on Sunday May 13. 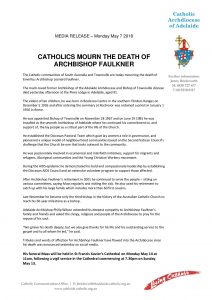