Rosslyn Richards is holding onto a handful of words like her life depends on it.

“Well, in some ways it does,’’ she says of reclaiming her first language, Ngarrindjeri.

Growing up at Wellington on a 160-acre farm flanked by her grandparents’ property and Lake Alexandrina, Ros’ childhood memories are of family and water.

She recalls watching her grandfather hunt and her grandmother milk the cows to make butter and cheese, and collecting yabbies along the river’s shore with her brothers.

“At certain times of the year we collected turtle eggs and we made up incubators and waited patiently for them to hatch. Our father took us and all the baby turtles into Adelaide and we sold them to pet shops at the markets.’’

“We weren’t allowed to speak our language, that’s just how it was, so we lost it – and now we’re trying to bring it back.

“There were things they (Aboriginal people) weren’t allowed to do back in those days unless you had the Exemption card.

“And then if you had the Exemption card, you weren’t allowed to vote or speak the language, or mix with your own people.

“You had to be seen more with non-Aboriginal people than your own family.’’

As the Ngarrindjeri language and hundreds more were gradually eroded by government policy, confusion reigned. 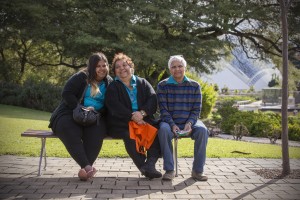 “It’s not fair on the young or old because they lose connection,’’ says Ros, a Family Practitioner with Centacare’s Journey to Learning program which readies children for kindergarten and school.

“Our language is very important to us but I only know a few words. I’d love to learn more and be able to speak it fluently. At the moment I’m only speaking little bits and pieces and putting English words amongst it.’’

He says Aboriginal people often spoke several languages, depending on their geographical roots, and that we must do all we can as a nation to recover and maintain our cultural heritage – before it is extinct.

John says this year’s NAIDOC Week is particularly important because it celebrates language and puts its significance into context for wider Australia.

“This is an opportunity for us to research and get some of our languages back that we can teach our children and they can teach their children and we can restore our culture.’’