When he is not captaining Port Adelaide Football Club in the SANFL next season, Cameron Sutcliffe will be in the classroom leading a push to shape the attitudes and values of young men.

The 28-year-old will spearhead the Power to End Violence Against Women (PTEVAW) program when it resumes in Term 1 to teach Year 10 boys about respectful relationships.

Sutcliffe will juggle the role with his responsibilities as the Magpies’ leadership player for 2021.

A joint partnership between Power Community Ltd (PCL), Centacare and the Department for Education, PTEVAW has engaged nearly 7000 15-year-old boys in schools across the state since it began in 2016.

Through the primary prevention program, students learn how to recognise and safely stand up to gendered drivers of abuse.

It’s a cause close to Sutcliffe who has seen the impact of domestic and family violence on a few good mates.

“Thankfully they were able to get through it with the supports around them, so programs like this are certainly very important,’’ he said.

Sutcliffe has worked with PTEVAW before, having joined PCL General Manager Jake Battifuoco on a previous school visit.

“It was an eye-opening experience, just to see the young guys take in the message,’’ Sutcliffe said.

“To be able to drive the development of young people, not only on the playing list but also in schools, has become a passion for me and I am grateful that the club has given me the opportunity to do both.’’

In August this year, PTEVAW celebrated its 100th school visit. At the same time, Centacare and PCL launched the EMPOWERED program, which works with girls to foster critical thinking about gender equity and women’s rights.

“Given how important continuity and capacity building over the long-term is for primary prevention, we have high hopes for these programs going forward,’’ said Pauline Connelly, Deputy Director of Centacare.

“Using sport as a hook to start conversations with men and boys around respectful relationships can be a powerful catalyst for change.

“Domestic violence is a choice. The more young people understand the values and attitudes that drive abusive behaviours, the better chance we have of stopping domestic violence before it starts.’’

Going back to school is not just daunting for little ones – older students can feel anxious too. Our parenting educators have put together some tips for parents of young people starting high school this year.

While they may feel excitement, fear, confusion and have a sense of curiosity and adventure, most will admit that starting a new school experience can be a bit scary.

They may feel lost and confused, miss their primary school friends and worry about fitting in.

Adjusting to these differences and their new learning environment can be challenging.

Secondary schools are much bigger, anonymous places than primary school where everyone knows your name. New school routines and unfamiliar classrooms and teachers add an extra dynamic.

Friendship circles change and even established bonds can be challenged in high school, as students tackle one of the primary developmental tasks of establishing identity.

Signs your child is not coping may include:

While children may exhibit some of these behaviours regardless of the onset of a new school year, if these signs persist after the first few weeks of term, it’s time to speak to the school to help address the source of stress.

It is equally important that parents look after their own well being too. Remember, this can be a stressful and confusing time for you also, as you juggle work, family and other commitments, and try and figure out how much support to offer your child.

Here are some favourite pieces of parental advice drawn from our parenting groups over the years:

This year we welcome Port Adelaide Football Club defender Jasper Pittard to the Power to End Violence Against Women campaign. 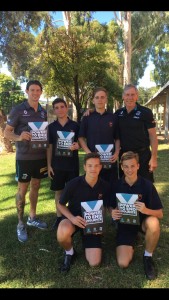 In his role, Jasper will visit schools with club legend Russell Ebert to talk to male students in Year 10 about respectful relationships with women.

We are grateful for the invaluable support of players as we continue our partnership with Power Community Ltd.

This term the #PEVAW program has engaged 305 students across four schools, including Norwood Morialta High School.

Students learn about respect, trust, gender equality, healthy relationships and the dangers of abusive behaviour, and how to make informed choices.

Launched in late 2015 with the help of the State Government, the program will be funded by Centacare until 2019 in order to reach more male students across the state.

There is a lot for children to absorb at the start of a school year.

From changing friendship groups to new teachers and classrooms, many of your child’s experiences will be different to last year.

Some children will adapt quickly to change but others may lack confidence and optimism.

New teacher styles can be a sticking point for some children. Just as we all learn in different ways, each teacher will take a different approach in the classroom.

Some children will not notice this difference but, for many, it can be overwhelming and a cause of anxiety. This may be apparent instantly or over time.

If change is bothering your child, what can you do?

Group dynamics often change at school and during the holidays. Friends may play together at recess and lunch but move in different social circles outside of school.

As a parent, watching your child grapple with friendships is very difficult – and hard to fix!

It is confusing and often painful for children if they are omitted from weekend playdates or groups at school one moment and then included the next.

Be understanding and try and give them some advice without saying too much. This is a normal developmental stage so reassure them it is ok to be sad and that it will get better with time as friendships evolve.

A changing group dynamic is different to bullying, which is repeated verbal, emotional or physical abuse intended to hurt, frighten or threaten another.

Tips for kids on forming friendships:

*If you need extra support, Centacare provides counselling to parents, families and children, and primary and secondary school students. Other support is provided through the National School Chaplaincy Program. For more information, please phone 8215 6700.