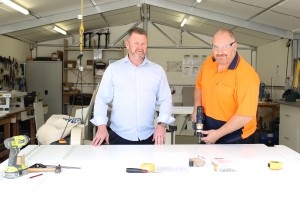 THE meaty cost of a quick lunch can bite hard for low income earners, but a new Centacare project is helping job seekers eat well and spend less.

Under the hospitality activity, Work for the Dole (WFD) participants cook lunches which they can then purchase.

In addition to saving money, the job seekers gain hands-on experience in food preparation and learn how to run a deli.

“That’s a ridiculous spend for fast food when their income is so low,’’ Anthony said.

Participants in existing cabinet making and mobile maintenance activities helped renovate an old kitchen and build a new servery for the project.

“Instead of the guys spending $15 a day, they can spend $6 and get a good, healthy feed,’’ Anthony said.

“In the process, they’ve learnt how to plumb and tile and performed other manual tasks, such as painting and gyprocking.’’

WFD places job seekers in activities for six months to help them develop the skills and confidence to gain employment.

Each activity is overseen by a trained supervisor who doubles as a mentor.

“A lot of it is breaking poor routines,’’ Anthony said.

“If someone’s been unemployed for a long time, their motivation to work often drops off and they become disengaged.

“This is real work that gets them into a routine and gives them structure as part of a team.

“One guy turned up on the first day dead against it, but he became a leader in the group and has just started a new job.
That’s a big turnaround.’’

Other activities include welding mobile barbecues for Muscular Dystrophy South Australia and rebuilding an old car.